As mentioned before, many of us are deeply saddened at the news of losing Archbishop Burke as he prepares for his new assignment in Rome. This sadness is only intensified by the numerous hateful and odious comments seen on some of the reports.

Those who had the opportunity to meet him and know him understood him as a faithful shepherd - humble and prayerful - completely opposite the tyrant others attempt to label him.

Today, June 29, is Archbishop Burke's 33rd anniversary of his ordination to the priesthood and tomorrow, June 30, is his 60th birthday. Let the faithful among us gratefully and prayerfully acknowledge these events in our Archbishop's life and pray that he is blessed with many more.

Again, please consider praying the Chaplet of the Holy Face (link at top of left sidebar) for Archbishop Burke's intentions and let us be grateful and thank God that we were so blessed to have had him as our shpeherd - even though his time with us here in St Louis was much too short. In our heart of hearts, many of us knew that he was destined for other assignments, and while we will certainly miss him, we can be certain that our humble acceptance of the will of our heavenly Father will be greatly rewarded. 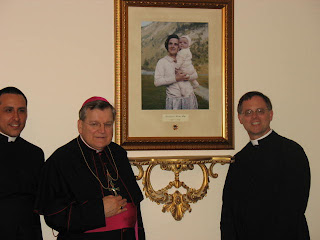 On May 31, His Excellency visited St Gianna Parish to celebrate Holy Mass and enshrine a picture and relic of St Gianna Beretta Molla in the temporary church. On the right is the pastor, Fr. Timothy Elliott.

After a wonderful presentation on the life of St Gianna, and the archbishop had left (perhaps the last time the faithful of the new parish he founded may see him), we witnessed this at we walked outside: 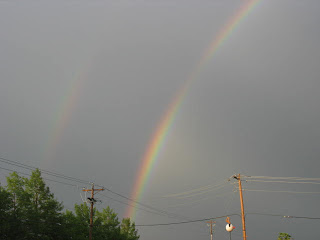 Why they hate him is why we love him! (Fr. John Malloy, SDB)

Archbishop Burke to Lead Church's Supreme Court (Zenit)
Says It Was an "Honor" to Have Served the Archdiocese of St. Louis

Archbishop Raymond L. Burke's Statement Regarding His Appointment as Prefect of the Supreme Tribunal of the Apostolic Signatura [Video]