Palin On Faith, Prayer, Homosexual "Marriage", and Abortion
Says that Senator B. Hussein Obama’s stance on abortion is “extreme...it’s so, so far left that it’s way out of the mainstream.”

Polish bishops: How to leave the Catholic Church
22-point guide gives advice to those departing

There should be no laws on abortion???
Law school at Catholic university salutes Leon Panetta, former Clinton chief of staff

Vatican: Don't pressure Pope on Pius XII
'Currently the subject of reflection and study on his part'

Theologian: priest shouldn't have to wear robes
Church of England rules are 'absurd in the 21st century'

Bishop: Adopting woman not against Church tenets
If so, 'I would be ready to annul the adoption'

Obama Admits Kenyan Born by Failure to Respond to Requests for Admission
Obama & DNC Admit All Allegations of Federal Court Lawsuit - Obama’s “Not” Qualified to be President
Obama Should Immediately Withdraw his Candidacy for President
(Lafayette Hill, Pennsylvania – 10/21/08) - Philip J. Berg, Esquire, the Attorney who filed suit against Barack H. Obama challenging Senator Obama’s lack of “qualifications” to serve as President of the United States, announced today that Obama and tbe DNC “ADMITTED”, by way of failure to timely respond to Requests for Admissions, all of the numerous specific requests in the Federal lawsuit. Obama is “NOT QUALIFIED” to be President and therefore Obama must immediately withdraw his candidacy for President and the DNC shall substitute a qualified candidate. The case is Berg v. Obama, No. 08-cv-04083.

The comprehensive argument against Barack Obama

DOJ attorneys in the bag for Obama?
Quin Hillyer of the DC Examiner is asking whether we have public servants or stealth political partisans inside the Department of Justice.

Hope & Change: Dead goldfish offered the vote in Illinois
...election officials in Chicago's northern suburbs want to know why voter registration material was sent to the dead goldfish. "I am just stunned at the level of people compromising the integrity of the voting process," said Lake County Clerk Willard Helander, a Republican, who said she has spotted problems with nearly 1,000 voter registrations this year. [Cheating is the only way for racist, terrorist-loving, socialistic tyrants to win]

Obama to take break to see sick grandmother
He is scheduled to fly to Hawaii Thursday and Friday to visit her.
[Why didn't he go last week when she was in the hospital? Isn't coincidental that he goes now when Andy Martin is there now, investigating Obama's background? When he went on vacation there recently. it is reported that he 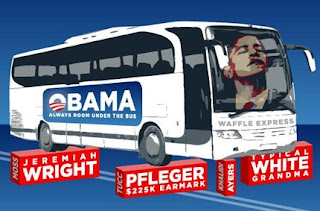 only spent 1 hour with her that entire week. So now he is rushing to go see her? If she is so ill, why wait until Thursday? Something doesn't add up!...

And let's not forget that he threw his grandmother, a typical white person, "under the bus" a few months back. That being said, she is in my prayers tonight!]

Former Secretary of State Madeleine Albright agrees with Sen. Biden that it is a 'statement of fact' that terrorists will test Sen. Obama within first six months of his presidency. [YouTube]

Chicago School Superintendent Gives Obama an "F"
The former head of the Chicago education system has spoken out against Barack Obama. The education foundation headed by Barack Obama "failed to monitor projects and funded school 'reform' groups that campaigned against boosting academic standards."
Paul Vallas, who was the superintendent of the Chicago school system when Obama chaired the Chicago Annenberg Foundation, said "There was a total lack of accountability. If you went back and asked, you'd be hard-pressed to find out how the money was spent."

Kurtz Confirms O's New Party Membership
During his first campaign for the Illinois state senate in 1995-96, Barack Obama was a member of, and was endorsed by, the far-left New Party. Obama’s New Party ties give the lie to his claim to be a post-partisan, post-ideological pragmatist. Particularly in Chicago, the New Party functioned as the electoral arm of the Association of Community Organizations for Reform Now (ACORN). So despite repeated attempts to distance himself from ACORN, Obama’s New Party ties raise disturbing questions about his links to those proudly militant leftists. The media’s near-total silence on this critical element of Obama’s past is deeply irresponsible.

Active Troops Disagree With Powell, Support McCain 3-1 Over Obama
Every American claims to “support the troops,” even those who have actively worked around the clock for years to “undermine the troops.”
Over the weekend, the man who recently traveled to the United Nations to lay out a very convincing case against the Hussein regime in Iraq put his race and his personal legacy ahead of his country and our troops by endorsing another Hussein for President of the United States. Colin Powell has never been an honest Republican. He has only been an honest opportunist. Once Obama offered him a high level position in his administration, Powell was quick to join the greatest con job ever perpetrated on the American electorate. 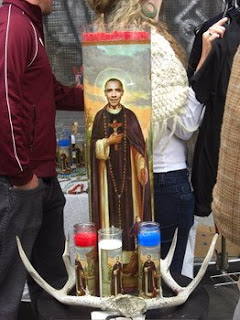 Votive Early, Votive Often
A reader took this picture today at a street fair at Hayes and Octavia in San Francisco, of all places. [Not surprising]

"Racist" not good enough, Now Murtha Calls Western Pa. "Redneck"
CHARLEROI, Pa. -- U.S. Rep. John Murtha is calling many of the people who put him in office "rednecks." The news comes one week after Murtha claimed the area is racist, then apologized for that comment. In explaining his comments about racism, Murtha told WTAE it's difficult for many in the area to change. Murtha said that just five to 10 years ago the entire area was "redneck." [And Murtha is a liar who slandered good and decent Marines by calling them murderers]

An Open Letter To Obama From Black Republicans
At a fundraiser in Jacksonville, Florida, Senator Barack Obama displayed his hypocrisy when he played the race card against Republicans, while whining that he expects Republicans to play the race card against him. This dishonest tactic is straight out of the Democratic Party’s race-baiting political playbook.
Since Obama wants the American people to believe he is disgusted by racism, we call upon Obama to condemn his fellow Democrats for their Jim Crow-style racist attacks against black Republicans because we do not adhere to the Democratic Party’s liberal agenda.

Not Surprisingly, Obama spokesmen LIE about Obama's review for Ayers book
Obama Spokesman Bill Burton denied Obama ever favorably reviewed Ayers’ 1997 book on the juvenile justice system, sarcastically titled "A Kind and Just Parent” in an interview with Fox News Company’s Megyn Kelly Tuesday. “He did not write a blurb for his book,” Burton said. “He did not.” [YouTube]

New Website Details Obama’s Extreme Abortion Record
October 20, 2008 (LifeSiteNews.com) - A campaign launched by several pro-life leaders has recently received media attention for its simple message: Those who vote for Obama vote to fund unlimited abortions with their own tax dollars. The campaign, formed by Operation Rescue, Christian Defense Coalition, and Christians for Social Justice, greets visitors to its website with an image of Obama superimposed on the traditional Uncle Sam image: "Obama wants you." Those who click to enter the site find the other half of the message: "Obama wants you to pay for abortion!" (http://www.obamawantsyou.com)
Posted by LS at 10/20/2008 11:00:00 PM