Gospel for Palm Sunday (At the Procession with Palms)

The Messiah Enters the Holy City 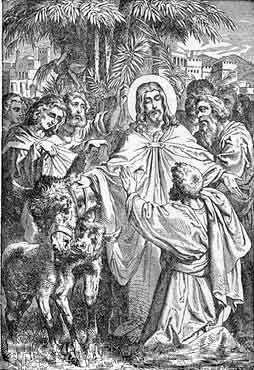 [1] And when they drew near to Jerusalem and came to Bethphage, to the Mount of Olives, then Jesus sent two disciples, [2] saying to them, "Go into the village opposite you, and immediately you will find an ass tied, and a colt with her; untie them and bring them to me. [3] If any one says anything to you, you shall say, "The Lord has need of them,' and he will send them immediately." [4] This took place to fulfill what was spoken by the prophet, saying, [5] "Tell the daughter of Zion, Behold, your king is coming to you, humble, and mounted on an ass, and on a colt, the foal of an ass." [6] The disciples went and did as Jesus had directed them; [7] they brought the ass and the colt, and put their garments on them, and he sat thereon. [8] Most of the crowd spread their garments on the road, and others cut branches from the trees and spread them on the road. [9] And the crowds that went before him and that followed him shouted, "Hosanna to the Son of David! Blessed is he who comes in the name of the Lord! Hosanna in the highest!" [10] And when he entered Jerusalem, all the city was stirred, saying, "Who is this?" [11] And the crowds said, "This is the prophet Jesus from Nazareth of Galilee."
******************
Commentary:

1-5. In his triumphant entry into Jerusalem Jesus reveals himself as Messiah, as St Matthew and St John (12:14) stress by quoting the prophecy Zechariah 9:9. Although the Latin translation says "mounted on a [female] ass", the original Hebrew text says "mounted on a [male] ass", and the latter is text followed in this translation (in the Greek translation of the Septuagint no sex is specified). The other two Synoptic Gospels limit themselves to giving the key fact of Jesus' messianic entry into the Holy City mounted on the (Mk 11:2; Lk 19:30). St Matthew sees in the fact that the colt is with the further detail of the prophecy, which refers to the colt being the foal of ass (that seems to be why the ass is referred to throughout the account, the ass being with the colt, although Jesus was mounted only on the colt).

In the prophecy in Zechariah 9:9 (which in the original Old Testament is longer than the quotation in Matthew) the future messianic king is described as "humble". The ass, originally a noble mount (cf. Gen 22:3; Ex 4;20; Num 22:21; Jud 5:10), was replaced by the horse in the period of the Israelite monarchy (cf. 1 Kings 4:26; 10:28; etc). The prophecy, by referring to an ass, shows that the King of peace wins his victory by humility and gentleness by force of arms.

The Fathers have read a deeper meaning into this episode. They see the ass symbolizing Judaism, for long subject to the yoke of the Law, and the on which no one has ridden, as symbolizing the Gentiles. Jesus leads both Jews and Gentiles into the Church, the new Jerusalem.

9. The Hebrew word "Hosanna", which the people use to acclaim our Lord, was originally an appeal to God meaning "Save us". Later it was used as a shout of joy, an acclamation, meaning something like "Long live...". The people are demonstrating their enthusiasm by shouting, "Long live the Son of David!" The phrase "Blessed is he who comes in the name of the Lord" comes from Psalm 118:26 and is a jubilant and appreciative greeting to someone entrusted with a mission from God. The Church takes up these acclamations, incorporating them into the preface of the Mass, to proclaim the kingship of Christ.
**

Source: "The Navarre Bible: Text and Commentaries". Biblical text taken from the Revised Standard Version and New Vulgate. Commentaries made by members of the Faculty of Theology of the University of Navarre, Spain. Published by Four Courts Press, Kill Lane, Blackrock, Co. Dublin, Ireland.