First, it's great to be back! And I'll try to make my first post after a long hiatus a good one. I'm not certain if news of this upcoming event is known in the St Louis area yet. It was discussed last night and I was given the opportunity to present it today.

The details:
On Sunday, November 11 at 3:00 PM, Rose Marie Dunn Hudson and Elsie Hainz McGrath are scheduled to be ordained as 'Roman Catholic Women Priests' in the St Louis Archdiocese by "Bishop" Patricia Fresen at the Central Reform Congregation at 5020 Waterman Avenue, in St Louis. 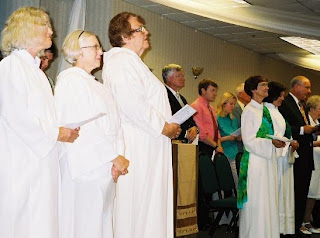 At left in the above photograph are three women who were 'ordained' to the deaconate on August 12 in Minneapolis. From left: Kathy Redig, Elsie Hainz McGrath, and Rose Marie Dunn Hudson. (Photo from the blog, The Wild Reed)

Not only are these pseudo-ordinations invalid but their "transitional diaconate" appears to be a mere three months. It must be special training, yes?

For what it is worth, Liguori Publications sells books and items by "deaconess and soon-to-be-fake-priest," Elsie McGrath. A call to Liguori indicated that they were aware of the problem. This is reminisent of the Bridget Mary Meehan incident last July after she decided that she would fulfill her "vocation" by being "ordained". Will Liguori also drop McGrath's books? We can only hope so. One might also wonder how it is that Liguori selects these people as reputable authors?

It is unclear if Rose Marie Dunn Hudson or Elsie Hainz McGrath reside within the boundaries of the St Louis Archdiocese. It is also unclear why such a spectacle would take place in the archdiocese.

No doubt, there will be more to come later as additional information becomes available.

*** Updated ***
Now that did not take long, did it? Bio info on the "Ordinands" from Roman Catholic Womenpriests

Elsie Hainz McGrath
MA/Theology, has been in active ministry for over 30 years. Widow of a RC deacon, she and her husband worked as a team, particularly in marriage preparation and marriage enrichment programs. She has been a college campus minister, an editor and writer who is involved in parish ministries, women’s liturgies, small prayer communities, and sacrament preparation. Presently engaged in further studies with an eye toward hospice/geriatric ministry and possibly a D.Min., and anticipating Walking With Women Called as a WOC mentor, she is an active member of Call To Action and Catholic Action Network. She lives in St Louis near many of her 4 children, 11 living grandchildren, and soon-to-be 9 great-grandchildren.elsiemc@sbcglobal.net

Rose Marie (Ree) Hudson
I was called to the ordained ministry at age 14. I have been married for 40 years, have four children and eleven grandchildren. My college and university degrees are in religion and education, the most recent of which was a Master of Pastoral Studies from Loyola of New Orleans. Presently I am in prison ministry where I have served for 12 years. I am considering further study in the area of homiletics. My home is in Festus, Missouri. Contact me at: reehud@sbcglobal.net

Also, Elsie McGrath was the featured 'homilist' for
Wisdom’s Feast , Women Led Prayer on May 19, 2007 which was sponsored by Justice for Women in the Catholic Church, Catholic Action Network (Link)

*** Updated again, 10/4 ***
At the "Women lead prayer" for Saturday February 17, 2007 at St. Cronan’s Parish in St Louis, sponsored by Women for Justice in the Catholic Church, a project of CAN, the homily was shared by:....Ree Hudson and Elsie McGrath - and they had not yet even been 'ordained'...

But that's not all. One needs only to look at the "Opening Prayer" to get an idea what goes on at these covens:

Come. (strike bell) The spirit of Hagar, Egyptian, black slave woman exploited and abandoned by Abraham and Sarah, the ancestors of our faith.

Rs. Come
Come. (strike bell) The spirit of Uriah, loyal soldier sent and killed in the battlefield by the great King David out of the King's 'greed for his wife, Bathsheba.

Invoking the spirits of the dead to come to them...but there's more:

And this was going on in a "Catholic" parish. This gets more bizarre every time I look into it.
###

And a Letter to Liguori is here...

Has someone forwarded this to your Archbishop Burke?