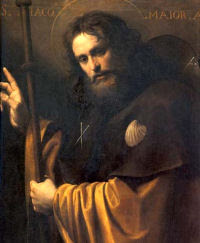 The Mother of the Sons of Zebedee Makes Her Request

[20] Then the mother of the sons of Zebedee came up to Him, with her sons, and kneeling before Him she asked Him for something. [21] And He said to her, "What do you want?" She said to Him, "Command that these two sons of mine may sit, one at Your right hand and one at Your left, in Your Kingdom." [22] But Jesus answered, "You do not know what you are asking. Are you able to drink the cup that I am to drink?" They said to Him, "We are able." [23] He said to them, "You will drink My cup, but to sit at My right hand and at My left is not Mine to grant, but it is for those for whom it has been prepared by My Father." [24] And when the ten heard it they were indignant at the two brothers. [25] But Jesus called them to Him and said, "You know that the rulers of the Gentiles lord it over them, and their great men exercise authority over them. [26] It shall not be so among you; but whoever would be great among you must be your servant, [27] and whoever would be first among you must be your slave; [28] even as the Son of Man came not to be served but to serve, and to give His life as a ransom for many."
______________________
Commentary:
20. The sons of Zebedee are James the Greater and John. Their mother, Salome, thinking that the earthly reign of the Messiah is about to be established, asks that her sons be given the two foremost positions in it. Christ reproaches them for not grasping the true--spiritual-- nature of the Kingdom of Heaven and not realizing that government of the Church He is going to found implies service and martyrdom. "If you are working for Christ and imagine that a position of responsibility is anything but a burden, what disillusionment awaits you!" ([St] J. Escriva, "The Way", 950).

22. "Drinking the cup" means suffering persecution and martyrdom for following Christ. "We are able": the sons of Zebedee boldly reply that they can drink the cup; their generous _expression evokes what St. Paul will write years later: "I can do all things in Him who strengthens me." (Philippians 4:13).

From what our Lord says here we can take it that positions of authority in the Church should not be the goal of ambition or the subject of human intrigue, but the outcome of a divine calling. Intent on doing the will of His Heavenly Father, Christ was not going to allocate positions of authority on the basis of human considerations but, rather, in line with God's plans.

26. Vatican II puts a marked emphasis on this "service" which the Church offers to the world and which Christians should show as proof of their Christian identity: "In proclaiming the noble destiny of man and affirming an element of the divine in him, this sacred Synod offers to cooperate unreservedly with mankind in fostering a sense of brotherhood to correspond to this destiny of theirs. The Church is not motivated by an earthly ambition but is interested in one thing only--to carry on the work of Christ under the guidance of the Holy Spirit, for He came into the world to bear witness to the truth, to save and not to judge, to serve and not to be served" ("Gaudium Et Spes", 3 cf. "Lumen Gentium", 32: "Ad Gentes", 12; "Unitatis Redintegratio", 7).

27-28. Jesus sets Himself as an example to be imitated by those who hold authority in the Church. He who is God and Judge of all men (cf. Philippians 2:5-11; John 5:22-27; Acts 10:42; Matthew 28:18) does not impose Himself on us: He renders us loving service to the point of giving His life for us (cf. John 15:13); that is His way of being the first. St. Peter understood Him right; he later exhorted priests to tend the flock of God entrusted to them, not domineering over them but being exemplary in their behavior (cf. 1 Peter 5:1-3); and St. Paul also was clear on this "service": though He was "free from all men", He became the servant of all in order to win all (cf. 1 Corinthians 9:19 ff; 2 Corinthians 4:5).

Christ's "service" of mankind aims at salvation. The phrase "to give His life as a ransom for many" is in line with the terminology of liturgical sacrificial language. These words were used prophetically in Chapter 53 of Isaiah.

Verse 28 also underlines the fact that Christ is a priest, who offers Himself as priest and victim on the altar of the cross. The _expression "as a ransom for many" should not be interpreted as implying that God does not will the salvation of all men. "Many", here, is used to contrast with "one" rather than "all": there is only one Savior, and salvation is offered to all.
___________________________
Source: "The Navarre Bible: Text and Commentaries". Biblical text taken from the Revised Standard Version and New Vulgate. Commentaries made by members of the Faculty of Theology of the University of Navarre, Spain. Published by Four Courts Press, Kill Lane, Blackrock, Co. Dublin, Ireland. Reprinted with permission from Four Courts Press and Scepter Publishers, the U.S. publisher.
Posted by LS at 7/25/2012 12:03:00 AM