Have We Become Slaves of Sin and Falsehoods?

For nearly two weeks, America has witnessed terrorism within its own borders, inflicted and sustained by those charged with protecting us from such acts - the deliberate and willful dehydration and starvation of one of its own citizens. But Terri is more than just a citizen. Let us not forget, that the Sacrament of Baptism unites us with each other with a greater bond than that which we have with our own biological families. In this regard, we can truly call one another "brother" and "sister".

Our country, in the deliberate act of murdering our sister in Christ, has abandoned its responsibilities.

Pope John Paul II, during his visit to St. Louis in 1999, reminded us:

At the end of this century at once marked by unprecedented progress and by a tragic toll of human suffering radical changes in world politics leave America with a heightened responsibility to be for the world an example of a genuinely free, democratic, just and humane society.

We have failed miserably in this responsibility.

How is it possible for our once great country to be an example of a free, just and humane society when we, and the whole world, have watched the protracted and horrific government sanctioned execution of a disabled woman for days on end. We are setting an example which is diametrically opposed to that called for by the Holy Father. It is opposed the the natural law, and most importantly, it is opposed to God's law. Tyrants have usurped that which belongs to God alone!

Our example to the entire world is that we are not a free society, nor a just society, and certainly, not an humane society. No pious platitudes to the contrary can ever justify the taking of this woman's life or the denial of her right to life.

When the "law" mandates that an innocent person must be murdered by dehydration and starvation, and the "law" furthers declares that it is a crime for one to interfere with that "death sentence" by trying to provide water or nourishment, it is a clear indication that the "law" is an act of tyranny and no "law" at all. This tyranny is made worse when government leaders give credence to this "law" by failing to act, by failing to take the necessary actions to protect that unjustly condemned person from the illegal mandates of the courts. They have become complicit by their inactions.

Those leaders who fail - and have failed - to take action to protect this woman appear to have washed their hands of the affair for the sake of political expediency, in a manner similar to others in history. 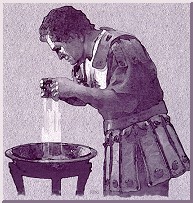 There is another lesson here: God has given us a moral law to guide us and protect us from falling back into the slavery of sin and falsehood.

When we reject the moral law, we reject God and His mercy. Coincident with this rejection, we lose our moral compass and the protection provided by adherence to the moral law.

Having no protection, then, from immorality and the evils of the world, we begin to embrace falsehoods which lead us into slavery and darkness. Where are we headed now that, under cover of "law", the government can withhold life-giving water and food from one of its own citizens (our sister in Christ), who is free from any criminal wrongdoing, and who happens to be mentally impaired. Indeed, it looks as if we are now enslaved - we have abandoned our morals and our freedom.

America first proclaimed its independence on the basis of self-evident moral truths. America will remain a beacon of freedom for the world as long as it stands by those moral truths which are the very heart of its historical experience.

The converse of his words are likewise true - if America abandons the moral truth, it will no longer be a beacon of freedom. We have been making a habit of "forgetting" our historical experience and, in so doing, we do not recall the proper meanings of "Life, Liberty, and the Pursuit of Happiness". Our beacon of the light of freedom has been extingushed - yet we may be able to recover it, if we can change our course.

We do not defend life, therefore justice is denied to us on this earth. And because we do not seem to want justice, there can be no peace. We are rejecting the truth and rejecting life.

This reprehensible act of the government, this gross miscarriage of justice, leaves everyone vulnerable to the whims and desires of a few who have appropriated for themselves the power to decide who lives and dies. As we watch Terri, our precious sister in the Lord, being ruthlessly and brutally murdered in 'slow motion', so to speak, we cry out to God for mercy for her, her family, and for all who seek to be freed from the slavery now imposed by weak or corrupt leaders.

We have witnessed, in this atrocity, that which may be only the beginning of far worse things to come.

I pray that our Lord would have mercy on Terri, her family, on us and, especially, on those responsible for this criminal behavior. May He provide comfort to her and her family as they must suffer at the hands of our once great country - a country of which I am so ashamed. May You, Almighty Father, provide all of us with the strength to endure the coming trials and tribulations which are certain to befall us for such crimes. Help us to live martyrs' lives with courage and conviction. Shower your children with grace so that hardened hearts might be open to Your love.

Some of us have wept and continue to weep for Terri and her family. A watershed moment has come and many have not heeded the call for action to save her. We will be weeping for our country and for our "leaders".

Have we become slaves of sin and lies? As a nation, it appears we have. Absent any substantial change, our future has already been written in history. It's shameful that we did not heed the admonition of the Pope John Paul.