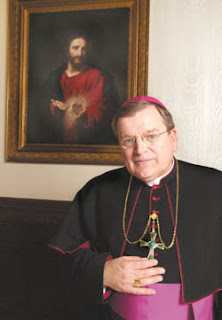 As reported on by KTVI Fox News, St Louis is now awaiting an administrator for the Archdiocese as Archbishop Burke is being transferred to Rome...Waiting for more details.

What a loss for the St Louis Archdiocese! I can't believe this! While we cannot help but feel a profound sense of sadness at the prospect of having a great bishop and spiritual father leave us, we understand that he is needed elsewhere for the good of the Church. For some of us, this is a very sad day personally - but this is a selfish attitude for us to have.

Even though this announcement may be painful for many of us, we should, nevertheless, congratulate His Excellency on this appointment and offer him our heartfelt prayers of support and joy. Evidently, the Holy Father recognizes his talents and abilities (as we did) and he needs him for the greater glory of God and His Church.

Let us not neglect our daily prayers for his intentions and may our heavenly Father, if it be His will, grant the faithful of St Louis another faithful and dedicated shepherd. [Bishop Bruskewitz, perhaps?]

Those of us who looked forward with anticipation to Archbishop Burke being named a Cardinal may soon see those hopes and prayers become a reality. Let us also not neglect to show our gratitude to God for granting us the opportunity to have been blessed by the appointment of this wonderful shepherd to the flock of St Louis. Let us also show our gratitude to Archbishop Burke for his fidelity and courage in the face of so many trials while he was our shepherd.

An update:
Archbishop Raymond Burke today was appointed to the office of Prefect of the Supreme Tribunal of the Apostolic Signatura in Rome. He will remain in St. Louis until he moves to Rome later this summer.

- Appointed Cardinal Agostino Vallini, prefect of the Supreme Tribunal of the Apostolic Signatura, as vicar general of His Holiness for the diocese of Rome, and archpriest of the papal basilica of St. John Lateran. He succeeds Cardinal Camillo Ruini, whose resignation from the same office the Holy Father accepted, upon having reached the age limit.

- Appointed Archbishop Raymond Leo Burke of Saint Louis, U.S.A., as prefect of the Supreme Tribunal of the Apostolic Signatura....