Another Article on Bishop Braxton

This story was from this past Tuesday...

At a daylong meeting Monday, about 65 priests from the diocese discussed the process by which Braxton was selected to replace Wilton Gregory, who left Belleville in January to become archbishop in Atlanta.

And again we hear that "reactions to the appointment and the lack of process range across the spectrum from anger to acceptance."

And again we hear from FOSIL (there's a good joke here, but I'll let someone else post one):

Members of the Fellowship of Southern Illinois Laity, the group that picketed outside the bishop's official residence earlier this month to protest Braxton's request for diocesan funds to renovate the home, have questioned the appointment process, saying the Chicago Archdiocese and local church leadership were circumvented.
...
"We think that many of the priests were concerned about the lack of due process and how we received a bishop," said member Anne Harter. "We had hoped that that would be on their agenda today and we just wanted to prayerfully support their efforts."

BTW, there a picture of the "fossils" at the link...

*** Updated ***
I had forgotten this, but FOSIL was represented at the recent St. Stanislaus "Candlelight Vigil" (at 11:00 AM) at the Cathedral on March 6...
Here is a picture of FOSIL representatives marching in 'solidarity' with those who are rebelling against Archbishop Burke and the Vatican: 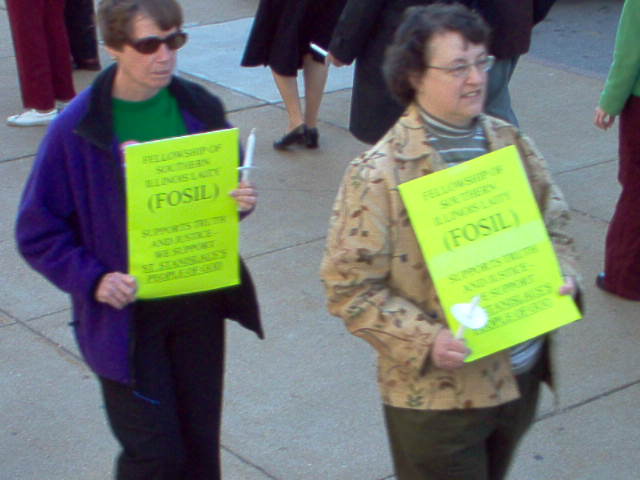