Updated 7/11-Below is a screen capture of the UMM page which linked to Myers' site before the link was removed. 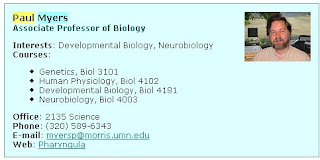 Paul Zachary Myers, a professor at the University of Minnesota Morris, has pledged to desecrate the Eucharist. He is responding to what happened recently at the University of Central Florida when a student walked out of Mass with the Host, holding it hostage for several days. Myers was angry at the Catholic League for criticizing the student. His post can be accessed from his faculty page on the university’s website.

“Can anyone out there score me some consecrated communion wafers?....if any of you would be willing to do what it takes to get me some, or even one, and mail it to me, I’ll show you sacrilege, gladly, and with much fanfare. I won’t be tempted to hold it hostage (no, not even if I have a choice between returning the Eucharist and watching Bill Donohue kick the pope in the balls, which would apparently be a more humane act than desecrating a goddamned cracker), but will instead treat it with profound disrespect and heinous cracker abuse, all photographed and presented here on the web.”

Some might wonder how willing this guy is to desecrate a Koran?

Apparently the guy is a bigot and seems to have major issues...It's beyond disgraceful that he is teaching young adults. And taxpayers are paying him to do it! Will the university do something about this? We can only hope and pray.

The professor's blog is not on the university's site. We Catholics don't do ourselves any favors when we don't report facts correctly. His blog entry is offensive but let's make sure our story is straight!

That is the link and yes, it is another reason to wonder if are young people should realy be going to college or not. Is it worth the cost?

Actually, anonymous, you are incorrect. His blog link WAS on the web site until he or someone else removed it. See:
http://64.233.167.104/search?q=cache:pWo_qvB7RlEJ:www.morris.umn.edu/academic/biology/faculty.html+paul+myers+UMM&hl=en&ct=clnk&cd=1≷=us

As a matter of fact I have a screen capture of it. Let's not blame the messenger, especially, when the facts WERE correct as stated at the time.

This is illustrative of everything that is wrong with contemporary academia: sheer boorishness masquerading as "academic freedom" and "freedom of expression." I've personally been subject to similar shameless behavior by crackpot academes.