From the Thursday night Fox2News segment "What's On My Mind" (as if anyone really cared) by J.C. Corcoran, viewers were treated to another of his baseless attacks on Archbishop Burke and the Catholic Church. Why KTVI permits this has-been and irritating blowhard to spew his malicious thoughts over the airwaves is unknown to viewers. 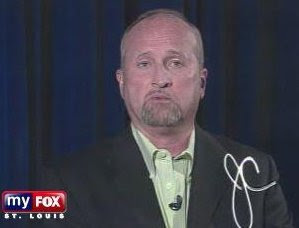 (KTVI - myFOXstl.com) -- St. Louis Archbishop Raymond Burke has energized some Catholics, but alienated others by defending and proclaiming the church's hardline teaching about excommunication, women in the priesthood, denial of communion to politicians who support abortion rights and other issues. FOX 2's J.C. Corcoran of K-Hits 96 has requested a few moments to speak to the flock.

You may watch the segment here...

Corcoran claims to send his daughters to a Catholic school and he also claims to participate in fund raisers for it...that would be sufficient reason, it seems, to avoid any participation with any event in which he is involved. Maybe he can someday explain why he would send his kids to a Catholic school if he finds the Church so objectionable? Maybe the school is not really Catholic, if you catch my drift?

But it gets even better. A local Catholic woman revised his commentary and sent this revision via email to KTVI to forward to Corcoran which has sparked another controversy - poor J.C. didn't like it! One listener of his Friday morning radio show writes :"I swear I heard him talking about being threatened via email this morning. Was that you?"

I’m not what they call a practicing news listener, I’ve watched the news along with my parents, and I regularly check out the St. Louis Post-Dispatch. But many years ago I gave up on news and commentators, basically because I thought it was … utter nonsense. So these comments tonight about the latest commentaries come from someone who is, at this point, pretty much an outsider. When I was a kid growing up in the St Louis area, if a newsperson was around, it meant everyone was dropping everything and fawning in his presence. Now, JC Corcoran’s name has become either a punch-line, or the subject of anger or ridicule. If I was a practicing listener, whether I agreed with him or not, I’d be very concerned about this. People seemed to get to the top of their respective field usually one of two ways:

Either by being very personable, effective commentators, or by mowing down everything and everybody in their path. History has shown us, however , that stuff catches up with you. JC is old radio, but I’m not convinced that “old radio” works right now…too many things have changed. What I see, again, from the outside, is that Corcoran is pretty much at the end of his public relations rope. The news commentary scandals continue to mount, the listeners are thinning, and young men and women aren’t exactly knocking down the doors of TV and Radio stations to get in to hear them. And locally, instead of a respected news leader in the community, you have a guy who’s been stomping around, alienating, threatening, intimidating, and carrying on since the day he got off the plane from nowhere.

You know, back in the summer of ’74 Richard Nixon was holed up in the Oval Office still firmly believing that he could ride out the Watergate scandal. But Republican icon Barry Goldwater drew the short straw and got sent in one Sunday night with the official word from the front lines that Corcoran was now damaging the entire news media station with his tactics, and it was time for him to pull his own plug.

My question is with the idea of protecting the media’s best interests, who is going to be that person?

PS: Your days are numbered, my friend. Watch and see!

And this has led to threats by J.C. to call the cops - what a big, brave man!

With just what you've sent me so far I could take this to the St. Louis police and have you picked up for, twice now, threatening me.

Call the police. I go to church everyday...the worst I could do to you is start a novena to either heal you of your anger towards the Roman Catholic church, or have you fired. Day 1 of the novena is today.

There's an old proverb: Better to live on the corner of a rooftop, then to be in a room with an angry woman!

Channel 2 would never allow you to make such commentaries about a Jewish Rabbi, Muslim Imam, or a black Protestant minister.

Back off my spiritual father! You have offended me more than a black person who's been called a "nappy-headed ho". I've filed a complaint to the Catholic League in New York.

Make sure to tell them (the police) they can find me at the Carmelite convent this evening from 7pm until 8:30pm.

Usually when I see Corcoran's face on the TV, I either mute the TV or switch to another channel - his opinions are are not worth listening to - and they never have been, many times they're repulsive and belittling. He has bashed the Catholic Church for years, unable, it seems, to overcome his issues with whatever darkness envelopes him.

Fox 2 News could certainly do without his commentary - and the sooner he's gone from the St Louis airwaves at KTVI, the better. As our Catholic friend says and does - pray for his sorry soul that he may one day overcome his problems.

By the way, Patty, the object of J.C.'s newest attack, has also requested prayers on her behalf!