A Decree of Enactment of Particular Legislation...

...Creating the Offices of Archdiocesan Cursor and Apparitor

By Most Reverend Raymond L Burke 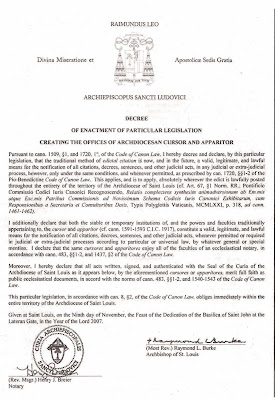 Pursuant to cann. 1509, §l, and 1720, 1°, of the Code of Canon Law, I hereby decree and declare, by this particular legislation, that the traditional method of edictal citation is now, and in the future, a valid, legitimate, and lawful means for the notification of all citations, decrees, sentences, and other judicial acts, in any judicial or extra-judicial process, however only under the same conditions, and whenever permitted, as prescribed by can. 1720, §§ 1-2 of the Pio-Benedictine Code of Canon Law. This applies and is to apply absolutely wherever the edict is lawfully posted throughout the entirety of the territory of the Archdiocese of Saint Louis (cf. Art. 61, §1 Norm. RR.; Pontificio Commissio Codici Iuris Canonici Recognoscendo. Relatio complectens synthesim animadversionum ab Em.mis atque Exc.mis Patribus Commissionis ad Novissimum Schema Codicis Iuris Canonici Exhibitarum, cum Responsionibus a Secretaria et Consultoribus Datis. Typis Polyglottis Vaticanis MCMLXXI, p.318, ad cann. 1461-1462).

I additionally declare that both the stable or temporary institutions of, and the powers and faculties traditionally appertaining to, the cursor and apparitor (cf. cann. 1591-1593 C.I.C. 1917). constitute a valid, legitimate, and lawful means for the notification of all citations, decrees, sentences, and, other judicial acts, whenever permitted or required in judicial or extra-judicial processes according to particular or universal law, by whatever general or special mention. I declare that the same cursores and apparitores enjoy all of the faculties of an ecclesiastical notary, in accordance with cann. 483, §§ 1-2. and 1437, §2 of the Code of Canon Law.

Moreover, I hereby declare that all acts written, signed, and authenticated with the Seal of the Curia of the Archdiocese of Saint Louis as it appears below by the aforementioned cursores or apparitores merit full faith as public ecclesiastical documents in accord with the norms of cann. 483. §§1-2, and 1540-1543 of the Code of Canon Law.

This particular legislation, in accordance with can. 8 §2, of the Code of Canon Law obliges immediately within the entire territory of the Archdiocese of Saint Louis.

Given at Saint Louis, on the Ninth day of November, the Feast of the Dedication of the Basilica of Saint John at the Lateran Gate, in the Year of the Lord 2007.

What does all of this mean? The current code of Canon Law (absent commentary) can be viewed here.

ARTICLE IV. - OF COURIERS AND APPARITORS
1578. Couriers or messengers shall be constituted, either for all trials generally or for an individual case, to give notice of the judicial acts, unless the approved custom of a tribunal dispenses with these officials. Apparitors (constables) should be appointed for the purpose of executing the sentences and decrees of the judge at his command. The same person can hold both offices .(Canon 1591). They should be lay persons, unless prudence demands in some special case that clerics be appointed to these duties; their nomination, suspension and removal shall be governed by the same rules as are given for notaries in Canon 373 (Canon 1592). The acts which the couriers and apparitors write in the execution of their office, are public documents and as such legal proof of the direct assertions in these instruments (Canon 1593).

With respect to the reference to cann. 1720 of the 1917 Code (also cited by Archbishop Burke), there is this (all references up to 1720 to provide background):

OF THE SUMMONS AND THE NOTIFICATIONS OF JUDICIAL ACTS

1673. The bill of complaint or the oral petition having been admitted, the other party must be summoned to appear in court. The summons issued by a court to the defendant is called the vocatio in jus. If the contending parties appear before the judge of their own accord to plead their case, it is not necessary to issue the summons, but the secretary or clerk of the court shall make a note in the acts of the case that the parties came to court of their own accord (Canon 1711).

1674. The summons is to be issued by the judge, and is to be written on the bill of complaint or joined to it. It is to be sent to the defendant, and, if there are several defendants, to each one. The plaintiff, moreover, must be notified by the court to appear on a specified day and at a fixed hour before the judge (Canon 1712).

If the defendant is a person who does not have the free aministration of the goods concerned in the controversy, the summons must be presented to that person who in his name must answer in the trial, according to the rilles of Canons 1648-­1654 (Canon 1713).

1675. Every summons is peremptory, and need not be re­peated, except in the case mentioned in Canon 1845, § 2 - namely, when the judge wants to punish for contempt of court a party who ignores the first summons (Canon 1714).

1676. The summons is to be presented to the party in a written form, which shall express the precept of the judge to the party to appear. It shall state the name of the judge who issues it, indicate at least in general terms the reason why the party is summoned, give the correct name and surname of the defendant, and state by whom he is sued; the place and time (ie., the year, month, day and hour), where and when he is to appear, must be clearly indicated. The summons authenticated with the seal of the court must be subscribed by the judge or by his auditor and a,notary (Canon 1715). The summons is to be made in duplicate, one copy being presented to the defendant and the other inserted into the acts of the case (Canon 1716).

1678. If for reason of distance or other cause it is difficult to have the summons delivered to the defendant by messenger, the judge can order it to be transmitted by registered mail and a signed receipt obtained, or in any other manner which according to the laws and conditions of the respective country is consid­ered safest (Canon 1719).

1679. Whenever after diligent inquiry it cannot be ascer­tained where the defendant stays, the summons by edict or pub­lic announcement can take place. This is done by having the messenger post the document of the summons at the doors of the Curia in the manner of a public notice, which is to be left there for a length of time to be specified by the judge, and by inserting the summons in some public paper. If both cannot be done, either manner of public notice suffices (Canon 1720).

Pehaps Dr. Ed Peters could shed some light on this?

By the way, Saint Louis Catholic has an excellent commentary as well, here...