Yesterday, Charles Jaco of Fox2 News reported on two women to be "ordained" as priests in St Louis today at a Jewish synagogue and who will be having 'services' starting December 1 at a Unitarian church...

His report with video is here. The same old tired arguments are put before the viewers again and some may actually buy into it. 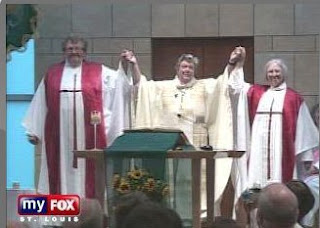 So today, Sunday, two new Catholic priests were ordained, but chances are you'll never see them at the pulpit in a Catholic church. The priests are women, and they're going up against centuries of tradition and church law. Their decision could get them kicked out of the church they want to represent. FOX 2's Andy Banker has the story.

And that story and video is here.